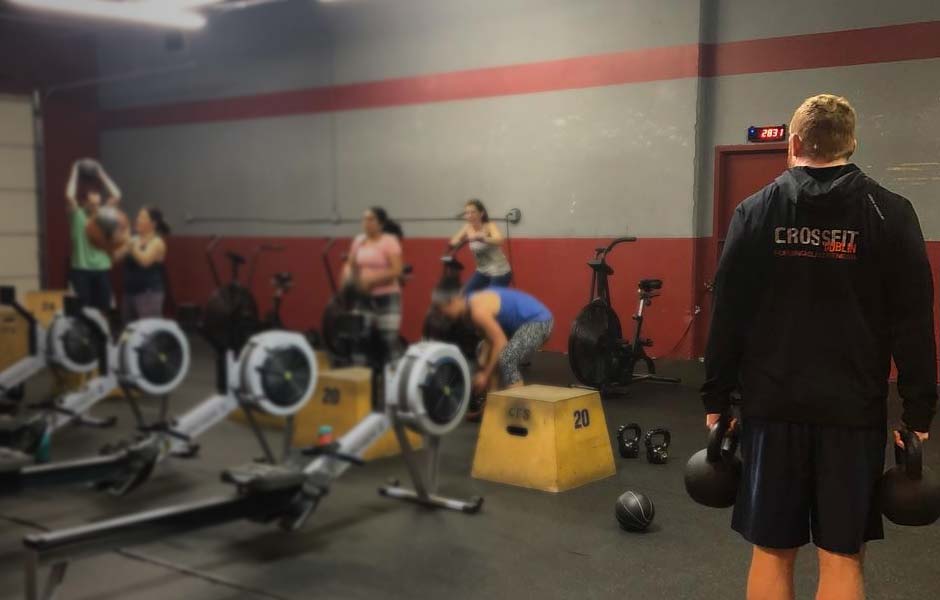 “I’ve made great, lifelong friends and have noticed, not sure if it’s the chicken or the egg, but for myself and friends along the way, career promotions seem to be the norm in the 7+ years I’ve been involved in the community.”

I moved to Stapleton 4 years ago for a promotion as my wife Jen and I were starting our family, she was 7 months pregnant! Now I’m the proud father of two boys, Josh and Zach.  Cooper (our 14# rat terrier) has been with us from the beginning.  I work in financial services and haven’t been on less than 100 flights a year since moving here. I graduated from Washington State University, Go Cougs!

When did you join CrossFit Stapleton and Why?

I joined 4 years ago in January-ish of 2013 – I’d been doing CrossFit at a friend’s box in Pittsburgh for a few years prior to moving here, so I knew what I was looking for; a box that was well kept with good equipment and coaches with a vision that were looking out for their athletes.  CFS fit the mold.

Very little activity after college when I started my career, a run here or a basketball game there, but nothing really.  In ’06 I saw a pic my Mom took of me at 235 pounds, shortly after I started running…  a few years later, Jen went to a box with a group of her girlfriends in Pitt that one of our friends opened and after a couple of weeks told me she thought I’d really like it.  I thought, oh great, more stretching workouts…..

The camaraderie and great friends I’ve come to know while being here.  I love seeing people overcome obstacles, so I get motivated and inspired by people grinding out workouts just about every time I show up.

How has this changed you in other parts of your life?

I have more energy throughout the day to be more present while reading books with my sons at night, dinner with wifey and friends, presentations for work, heavy lifts, or killer met-cons.  I’ve made great, lifelong friends and have noticed, not sure if it’s the chicken or the egg, but for myself and friends along the way, career promotions seem to be the norm in the 7+ years I’ve been involved in the community. I’ve gotten serious about understanding nutrition and diet and how you can use them to fuel your system, this has helped me feel healthier with more focus and mental clarity.

What goals has crossfit helped you reach?

My original goal was to find a fitness routine I could enjoy consistently that would allow me to eat too much crap every now and then and enjoy a pint or 2 with my friends.  Running was leaving me injured.  After joining CrossFit, I learned the POSE running method, haven’t had a running injury since, and am a stronger runner now than ever before.  I recently saw a weight on the scale that I haven’t seen since I was 16! My family believed that we weren’t blessed with genes to have our abs show, but I got a first peak at mine when I was 33. I’m still competing with weights I used to lift in high school and I can say that I am the healthiest I’ve ever been.

Is there is really something unique about our program that is different from anything else out there?

I’d reiterate that the coaching is very good and the fact that they do a great job of taking their ego’s out of it allows for a friendly, competitive atmosphere. I travel for work, and having been to several competitions and several boxes in other states, CFS does a better job of this than anywhere else I’ve been.

Go out of your way to introduce yourself to people before and after the workouts and cheer people on. Wouldn’t it be great if your voice helped someone along their journey today?

To ensure the health of our staff and members, we are not currently accepting out of state drop-ins. If you are local, please call us or contact us using the button below, and we will get you registered for class.

We apologize for the inconvenience and look forward to seeing you in the future!